Associate Professor Denise Dowling began teaching at the School of Journalism in 2000. She served as chairwoman of the school’s Radio-TV Department before she was named interim dean in the fall of 2012.

She teaches courses in journalism ethics, television writing and producing, and radio reporting. She launched the award-winning student radio program, “Footbridge Forum,” a call-in show that features debate on key issues and a search for solutions.

She came to the school after 20 years in the TV news, first at KPAX-TV while an undergrad at UM.  She moved on to stations in Montana, Colorado and Washington, working as a director, technical director, producer, executive producer and managing editor.

She spent 17 years working in Spokane, working at both the ABC and NBC affiliates. She won a number of Emmy Awards and Edward R. Murrow awards as part of teams that covered a firestorm, flooding, an ice storm and the arrest of a serial killer.

Dowling earned her bachelor’s degree in radio-television from the University of Montana and a master’s in learning and technology.

In 2013 Dowling was awarded the Tom Boone Town and Gown award for fostering deeper understanding between Missoula and UM. She serves on the Board of Governors for the National Academy of Television Arts and Sciences-Northwest Chapter.

She describes herself an amateur tennis player that inadvertently qualified for a regional USTA competition in 2012. She is married to Chris Johnson and has two children. 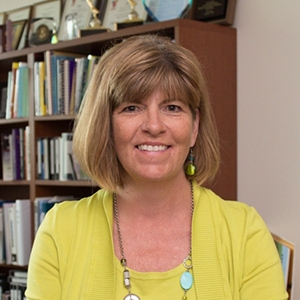